While working for Handshake VR, I was given the opportunity to create games that would demonstrate how haptics could add to the gamers experience.

There were only a few of us working at Handshake to build the engine so I took on many hats programming low level network code, physics, haptics, and 3D graphics.

The games we could create in a short period of time were limited but fun to play because these games had haptic aspects that couldn't be experienced on any other console or platform.

For example here is a picture of a fishing game that I made. 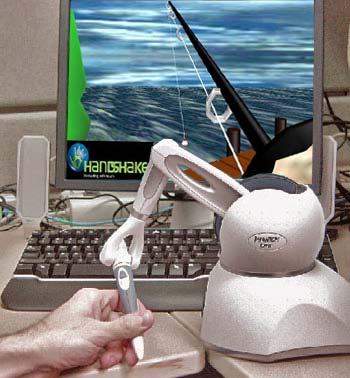 You controlled the fishing rod by manipulating the Omni Touch a haptic device. If a fish nibbled on the bait, you would feel it in your finger tips. The player had to yank the rod up to catch the fish. If you got the timing right you would hook the fish and then it would start to try to swim away. That is when the magic happened. You would feel a force tugging your hand down and towards the screen as the fish tried to swim away. Pull too hard and you would break your fishing line.

Another educational game I remember making for high school teachers was a physics instruction lab. The player controlled a character that would travel across water in a canoe. When you entered the canoe you would feel the bobbing up and down in the water and the buoyancy of the vessel could be explored. Using the haptic device you could also feel the compliance of materials. You could feel whether an object was 'hard' or 'soft' by pressing into it virtually.

With the following demo, you controlled a pointer that you used to explore the ridges and valleys of a 3D shape like the surface of an American penny. 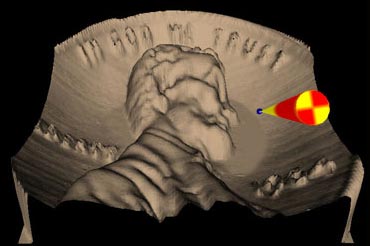 Haptics adds a sense of touch to games. Rumble pads are popular with gaming consoles but true haptics is more than just a vibration in your hand. Haptic devices like the Falcon let you not only explore the shape, compliance or density of materials, but you can also experience gravity first hand (pun intended). If you pick up a haptic virtual object, you will feel a force on your hand downward. Your brain quickly figures out which items are heavier or lighter than others. 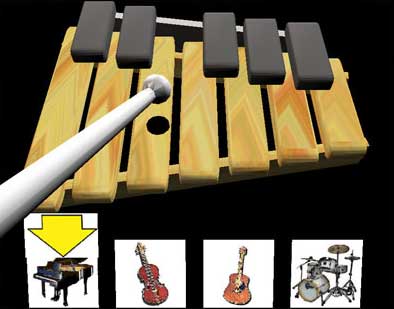 In the game shown above, the player picks up a drum stick and hit things with it. Doing so gives a kick back force to your hand and also make an accompanying sound to match the thing that you hit.