I joined a startup company called Handshake VR in 2005 where I was introduced to Haptics.

At that time, we were building a general purpose Haptic Engine that users could easily plug their 3D models into and connect any of the commercially available haptic devices to. You would then be up and running in minutes, with no coding required!

The biggest barrier to entry at the time (and still is today) was the Haptic hardware .... it cost thousands of dollars! I'm not talking about your rumble pad game controller ... no, this hardware included things like the Omni Touch or Phantom, from 3D Systems or the Delta or Omega from Force Dimension.

This hardware was able to replicate the sense of touch so you could feel the weight of something that you were holding, you could feel the subtle interaction of water sloshing around in a cup that you are holding. You could even identify objects as being hard as a rock, or soft as a sponge or anywhere in between.

One of my tasks was to create medical applications for schools training new doctors. I got to create a dental simulator shown below. 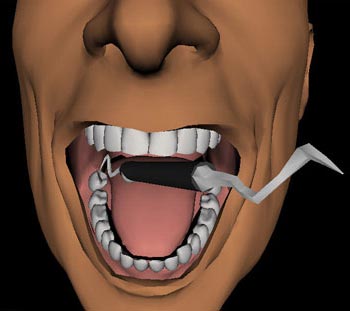 Using the Haptic hardware you controlled a dental pick. As you poked around inside of the virtual patient's mouth, you could feel all the dips and contours of each tooth. But be careful not to poke the gums or the patient would scream "OUCH!" and move away. 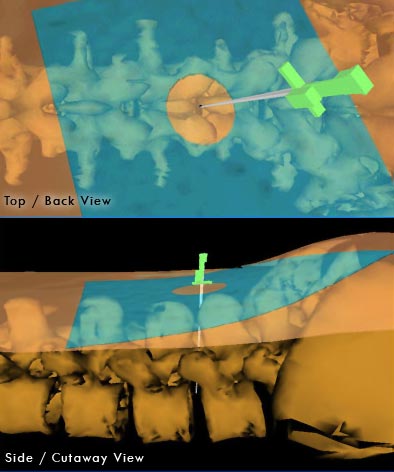 Here you controlled a needle that you needed to poke though the skin and between the virtual patient's vertebrae into the spinal canal. I had real doctors use this simulator to give me feedback on the sense of touch that I was simulating to ensure that the VR simulation was true to life from the force perspective. I have to say, this was one of the creepiest simulations I made... it would give me shivers up my spine each time I used it.

I created many applications throughout the years, and more medical simulations when I joined Novint.